How to identify poison ivy and a natural remedy, jewelweed 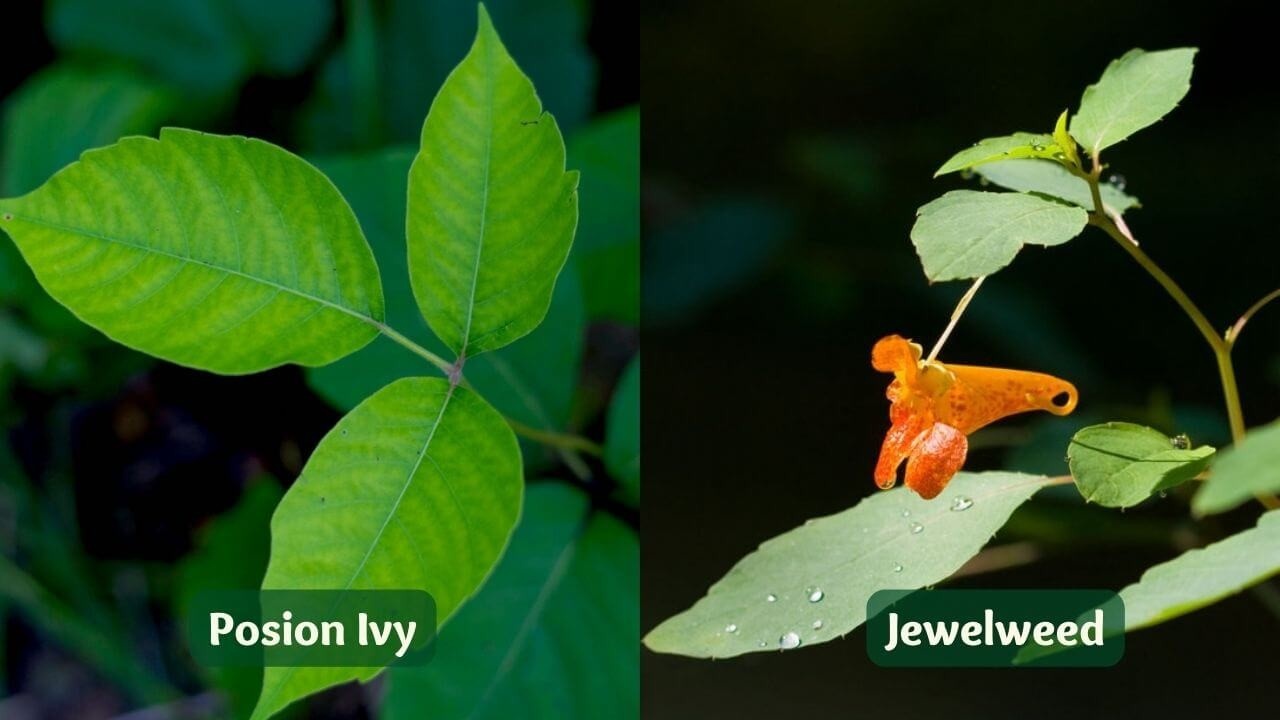 For those of us who love the green and growing things, it pays to know our neighbors. Learning how to identify poison ivy—and the natural remedy jewelweed—can prevent an unpleasant encounter.

Whether you’ve had a personal experience with poison ivy rash yourself or listened to a gruesome retelling, poison ivy can strike fear in the hearts of nature lovers. And while that reputation is well earned, there’s really only one tool you need to stay safe: proper identification.

You can also take comfort in the fact that nature offers a helpful remedy, jewelweed, often found nearby.

A nature-loving woman I know grimaces to tell the story of a romantic interlude from her younger days. She and her paramour had wandered off one night to the edge of her flowerbeds to enjoy some stargazing. It was a warm night in early spring and they settled down to appreciate the celestial display.

However, two days later, she realized that she had taken away more than fond memories from her evening of contemplating the heavens. A constellation of itchy, burning bumps had appeared across her back, arms and legs. 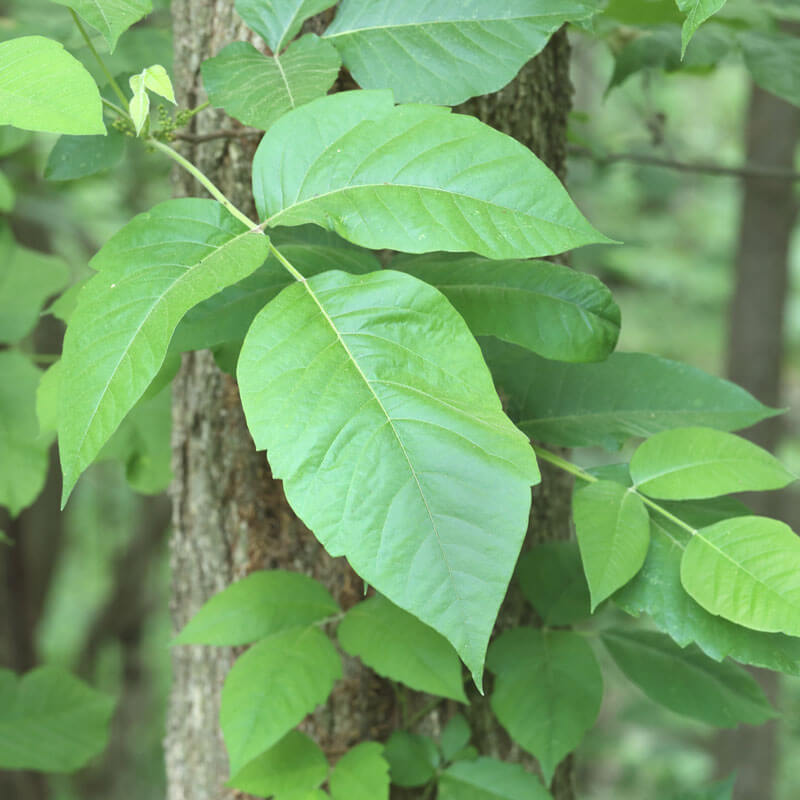 What two words in the English language can elicit such an immediate, itchy response—except, perhaps, tax audit?

Anyone who plays in the outdoors or tends a garden will, sooner or later, encounter this unobtrusive yet unforgettable vine. So in the case of poison ivy, forewarned is forearmed.

Let me share some tips on how to identify poison ivy, so you can avoid her infamous skin reactions.

As you gain confidence in your identification of poison ivy, start taking note of where she resides in your stomping grounds—and give her the space she desires.

How to identify poison ivy

Poison ivy (Rhus toxicodendron), and her cousin, poison oak (Rhus toxicarium) both secrete oils that contain urushiol, a toxin that produces contact dermatitis–in lay terms, a nasty, allergic rash. So it’s best not to become intimate with this lady. In most areas of the U.S., poison ivy is the primary one to be on the lookout for. 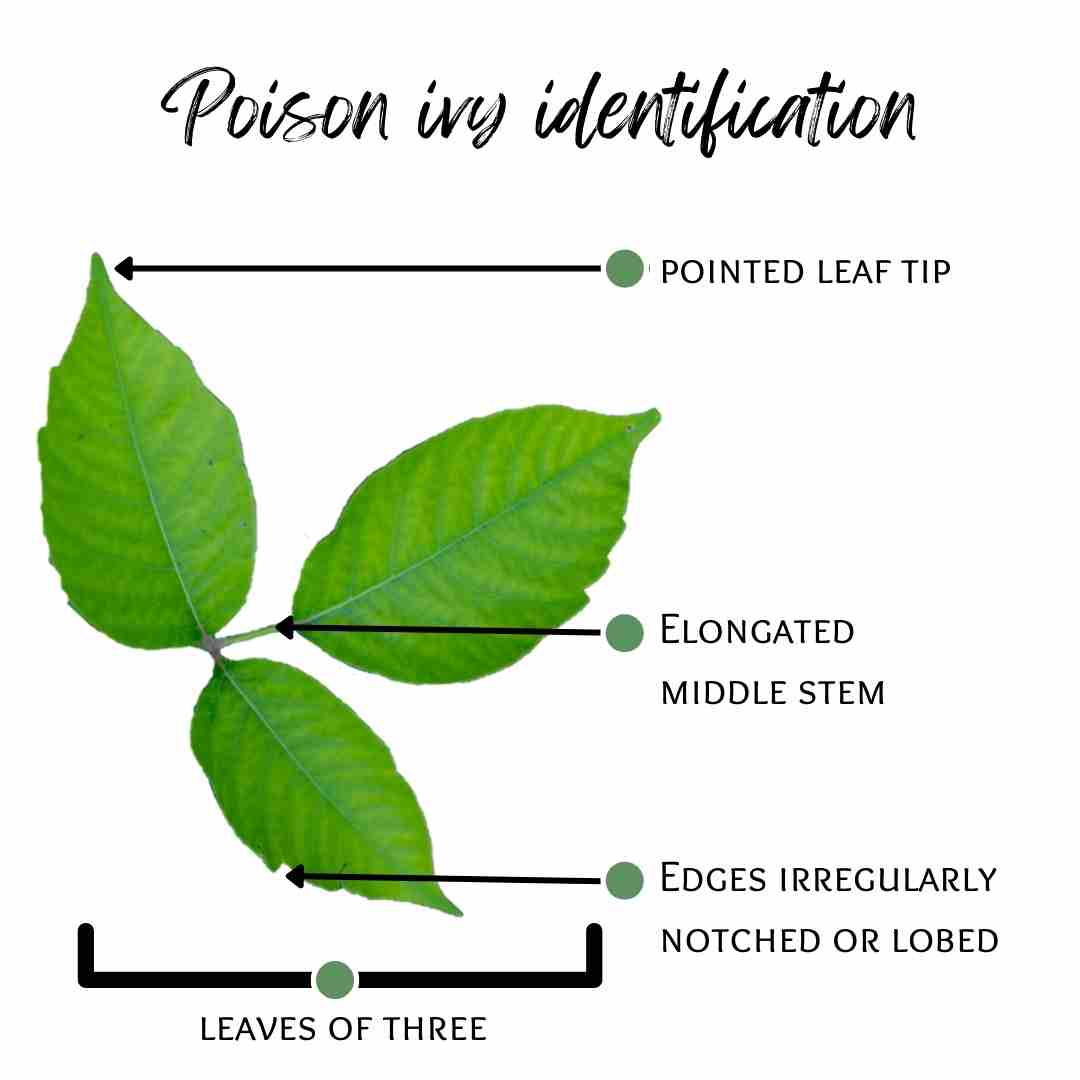 In early spring, yes, poison ivy may have shiny leaves and a reddish hue. However, the leaves will soon turn a rather pedestrian green shade that acts as camouflage among the surrounding vegetation. Therefore, the leaf shape and pattern is the most accurate feature for the identification of poison ivy.

So look for the pattern of the leaves—poison ivy leaves are in a group of three leaflets where the middle leaf has an extended stalk.

On poison ivy leaves, you’ll notice occasional notches or lobes in some of the leaf edges. Just remember, these characteristics of the leaf shape are more reliable than their level of shininess or color. 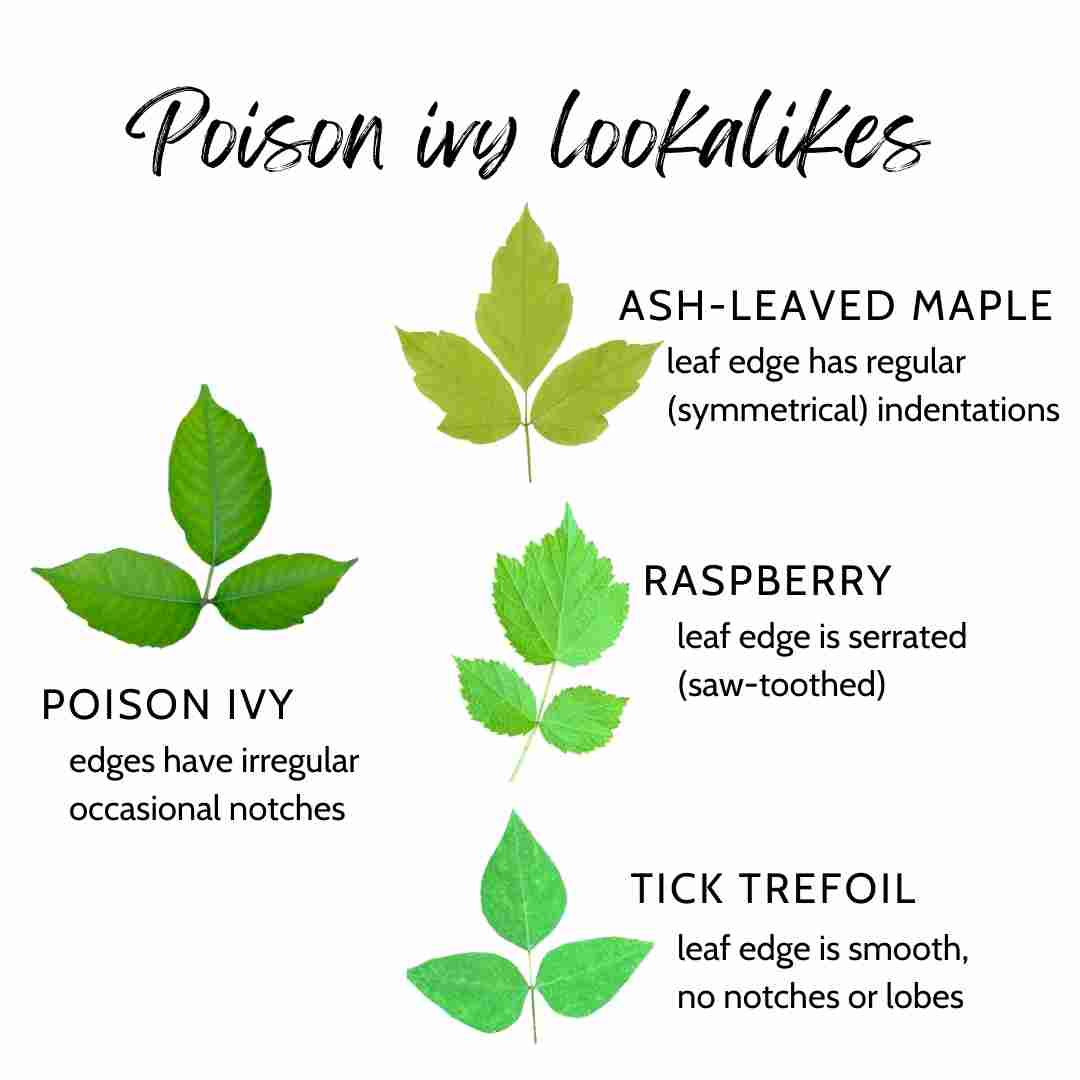 5 tips for how to identify poison ivy

The size of the leaves and overall growth patterns can also vary widely. Poison ivy takes many forms—a spreading ground cover, a small bush or a hairy, snaking vine that climbs up trees. (Don’t touch any hairy vines growing up trees—the hairy stems themselves carry the toxic oils as well!)

Remember, the entire poison ivy plant is toxic–leaves, stems and roots. In the case of my astronomer friend, it was too early in the season for the telltale leaves to give her warning. The bare stems were the culprits.

Animals are generally immune to poison ivy's irritating oils, although they can carry them on their fur and innocently share them with you. Intrepid children may wander into her midst unawares (until they start to scratch within a day or so).

So, if you live or play in an area where poison ivy is abundant, it’s essential to know the “poison ivy status” of anyone or anything you may hug or snuggle. Always assume the worst and send them off to the showers!

Unfortunately, we often tangle with this nemesis in places where we are without the benefit of running water. Ah, all is not lost . . .

Identification of jewelweed, a natural remedy

Fortunately, Mother Earth loves balance and often offers some jewelweed (Impatiens capensis, I. pallida, and other similar species) near stands of poison ivy. Jewelweed is a healing plant ally that acts as a natural remedy for poison ivy reactions.

The chemical compounds in jewelweed help to neutralize the urushiol—the irritating oil in poison ivy that causes the rash.

It is most effective when applied immediately after potential poison ivy exposure. So knowing how to find jewelweed out in the field is key! 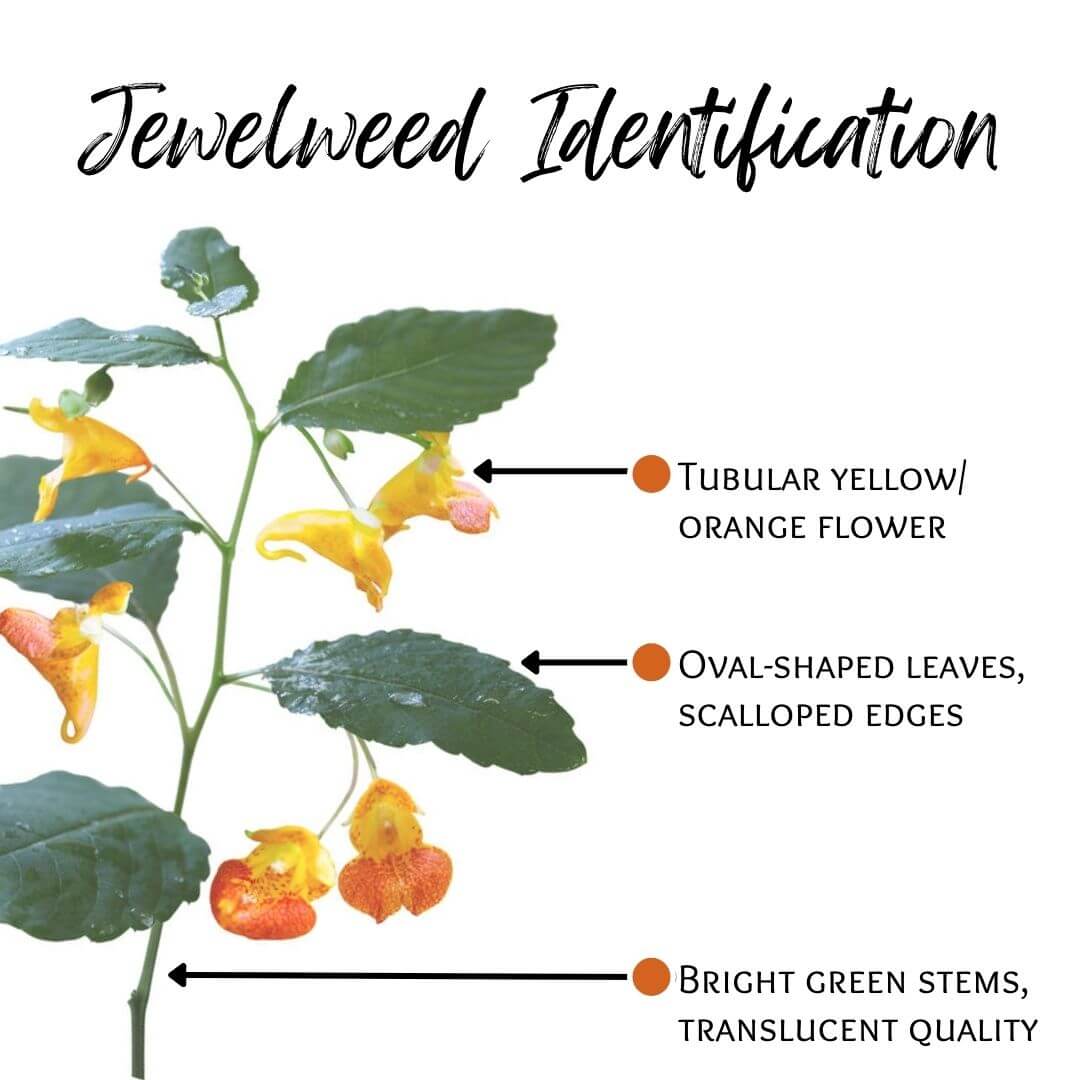 It’s easiest to get to know jewelweed in the summer when her flowers are in bloom—an exquisite, tubular yellow-orange flower, which resembles a golden cornucopia. In the late summer, as the flower develops into seedpods, that's when the fun begins . . .

Jewelweed is also known as ‘touch-me-not’ because at the slightest jostling her seed pods will spring open and spray seeds up to four feet in the air—an effect that delights children and adults alike.

Jewelweed’s plump, juicy stems are bright green, and so watery-looking that the whole plant is somewhat translucent. Her leaves are oval, with a gently scalloped edge.

To this day, I vividly remember my first experience with jewelweed leaves during a children’s nature walk in an Arboretum. 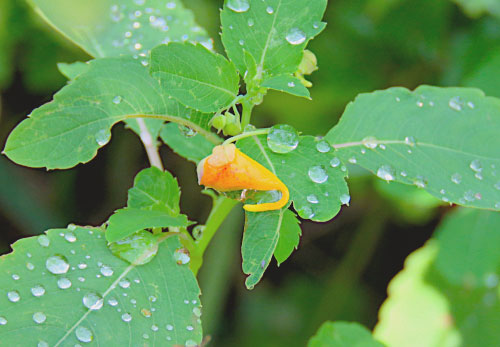 The leader entranced me with a glistening silver leaf undulating like a mermaid's tail beneath the water’s surface that turned out to be the translucent, serrated-edged jewelweed leaf.

When she pulled it out of the water, I learned how jewelweed earned her name—the water droplets beaded up, like little “jewels” glittering in the sun!

I still love to catch sight of her shimmering at the edges of ponds and streams after a light summer rain.

Yes, jewelweed is very pretty and quite entertaining, but don’t take her too lightly because of it. She may be dainty, but she’s powerful.

Her leaves and roots contain strong anti-inflammatory and anti-itching properties, which offer an effective treatment for hives, insect bites and of course, poison ivy. 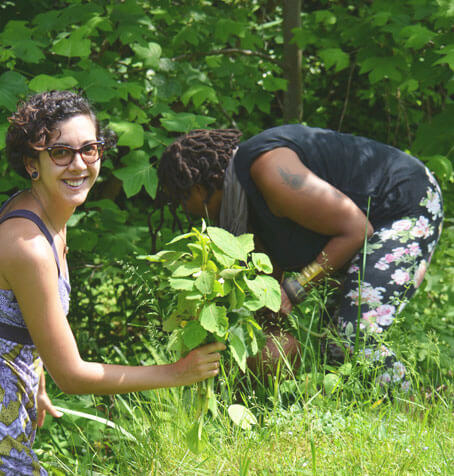 Knowing jewelweed is often found growing in close proximity to poison ivy is a great benefit if you encounter that irritant while out on a hike.

Split the succulent stem and rub the watery juice onto your skin to prevent or minimize an outbreak of poison ivy. Use her clear, calming juices as a poultice—right from the leaves and stalks—directly on areas of poison ivy exposure.

Jewelweed is also useful for treating and reducing the severity of the irritation and inflammation should a rash develop.

I suggest keeping some jewelweed extraction on hand even in winter when poison ivy is dormant in case you meet up with urushiol oil residue on tree trunk vines or firewood. 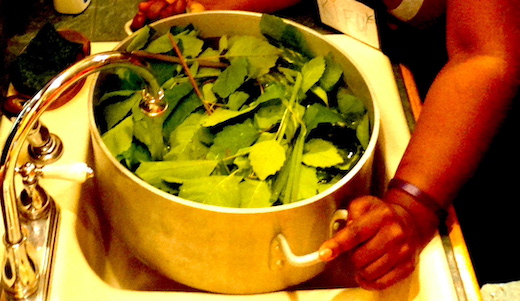 The medicinal properties of jewelweed extract best into a water-based solution, so the easiest way to preserve the benefits of this plant is by freezing jewelweed broth.

Now you have a soothing, cooling jewelweed preparation for topical use on hand year-round!

Note: just make sure that you don’t pop those ice cubes into a drink by mistake. Although many wild food guides list jewelweed as edible, it ain't edible in my book! Some folks get an upset stomach if they ingest jewelweed.

For more tips and tricks on using edible and medicinal wild plants, check out my blog article on wise woman herbal medicine making.

An ounce of prevention 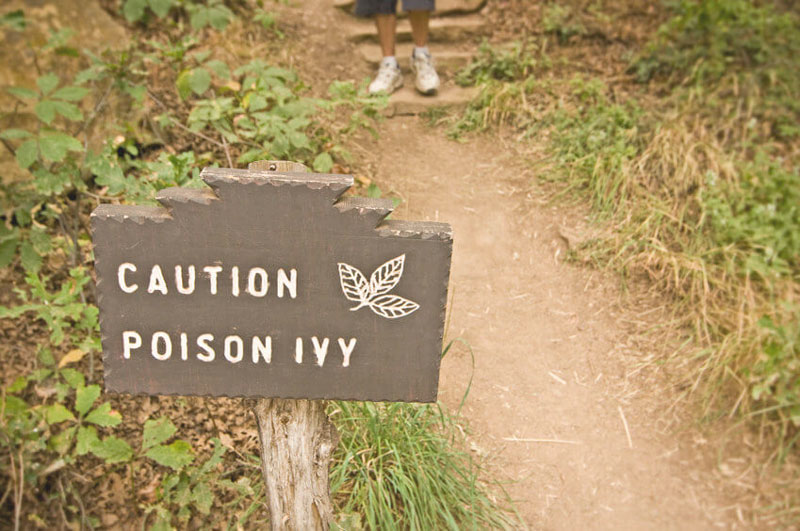 Poison ivy loves to intermingle with other plants and usually appears in areas that have been disturbed by human intervention, frequently at the edges of pathways, cleared fields and building sites.

In this way, she actually has a role in the ecosystem as an earth-healing plant, defending her little patch of ground from further human intrusion. She covers Mother Earth’s skin—the topsoil—allowing it to recover and renew itself.

Given poison ivy’s ubiquitous presence, you may choose to deal with her by building up some immunity to her “charms.” So many people have benefited from Rhus tox, a commercial homeopathic preparation, that it is available not only in health food stores but also in most mainstream pharmacies today.

Homeopathic preparations are made by repeatedly diluting the physical properties, which is said to increase the energetic properties.

Some brave individuals, who have the mettle for a more daring approach, go to the lady herself—engaging the energy directly. Beginning with the tiny, first growth leaves in the early spring, they harvest and swallow a thumbnail-sized piece of leaf (wearing gloves, of course). They say that repeating this procedure every 3 weeks builds up their immunity to the misery of poison ivy.

Although I do know people who have found this method to be quite effective, I cannot recommend it. It must be utilized with great caution and at your own risk. Many say that this controversial method risks severe, even fatal, allergic reactions.

In the 1960’s and 1970’s, the late Euell Gibbons, author of Stalking the Wild Asparagus, had an ongoing debate with Kingsbury, author of Poisonous Plants in the U.S. and Canada, over this very issue. The debate began with Kingsbury criticizing Gibbons for sharing his own success story of eating poison ivy leaves, although Gibbons wrote clearly that “it was not a safe or settled scientific practice” (see Mother Earth News, issue # 15, May/June 1972). 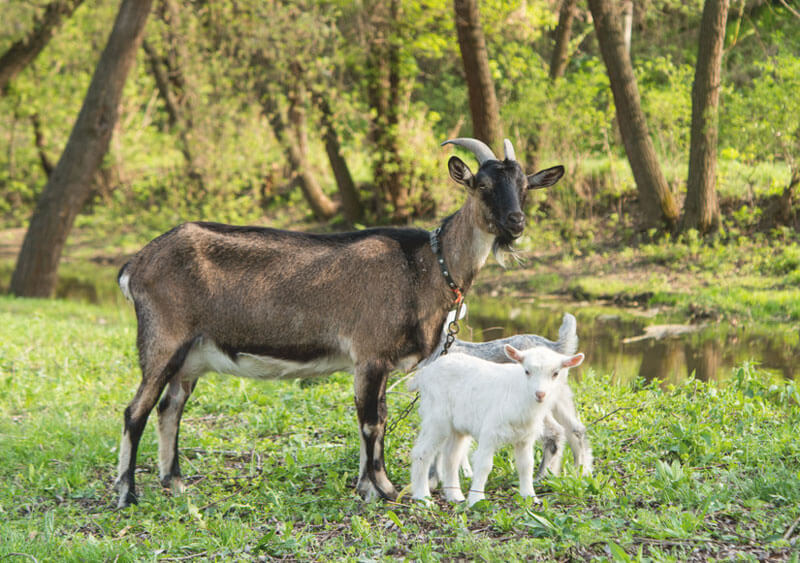 It has also been suggested that ingesting the milk of animals that have grazed on poison ivy will have the same result. Goats are particularly fond of her. Of course, this demands that you know your goat and where she dines.

Identification of poison ivy and using jewelweed for poison ivy

Awareness and learning how to identify poison ivy is vital to co-existing with this protective plant. Remember the three-leaf structure!

Leaves of three,
Lobed not serrated
The stem in the middle
Is elongated

The more you look for this shape among the green beneath your feet, the easier it will be to spot her. You’ll begin to know where poison ivy resides in your regular spots and avoiding her will become second nature. 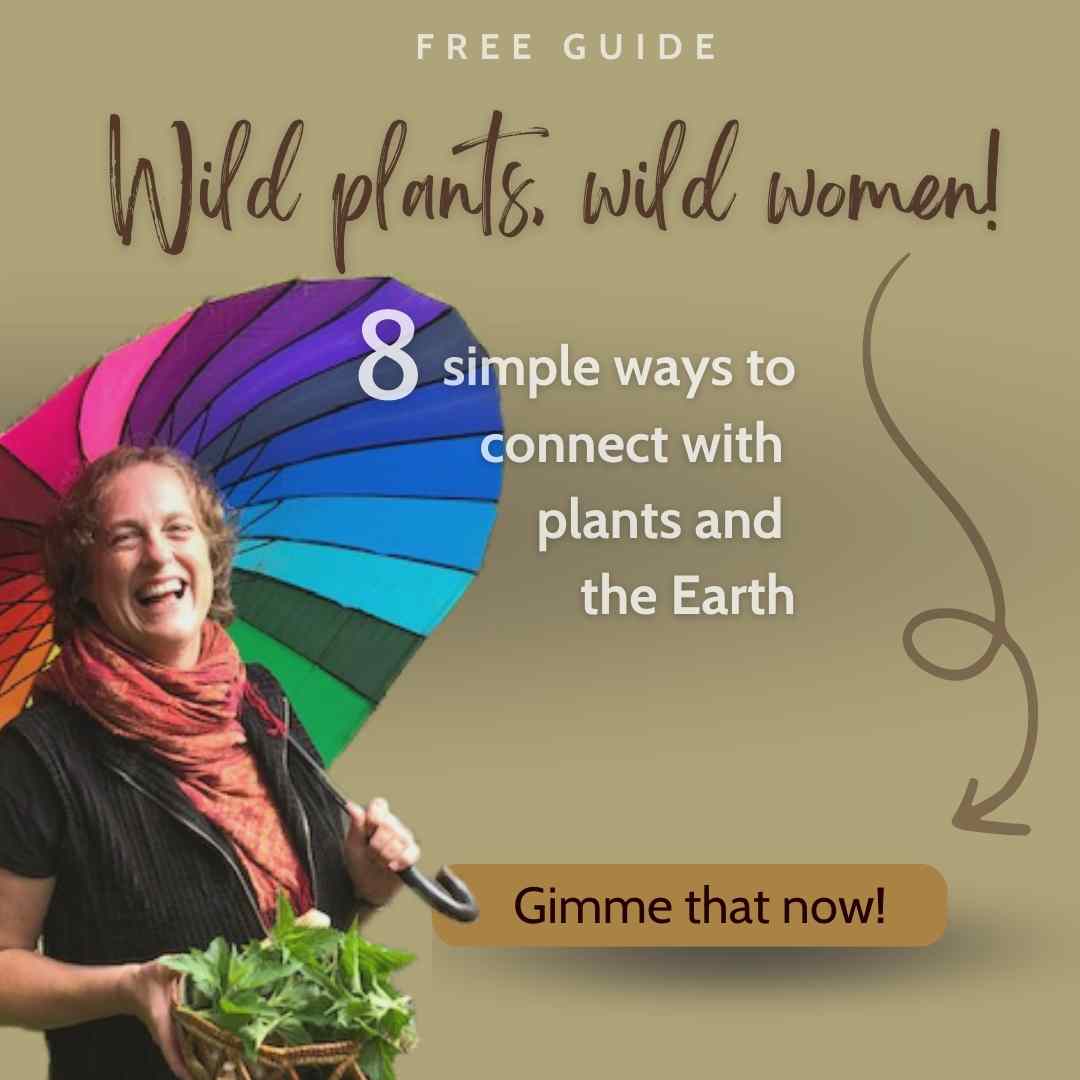 This can be a chance to learn to love poison ivy for what she embodies: boundaries and protection.

And while you're at it, keep an eye out for an opportunity to introduce yourself to jewelweed—a natural counterbalance to poison ivy.

Know that jewelweed tends to grow in or around poison ivy and keeps your eyes peeled for her orange cornucopia blossoms in summer. Once you find where jewelweed has made home, lock that location in your mind forever.

Remember to keep poison ivy in mind whenever you commune with nature or don your gardening gloves and maintain a respectful distance. Address any close encounters as quickly as possible.

As my friend learned: don’t be so caught up in what’s going on over your head that you forget what’s under your feet!

Spread the wise woman ways! Link to this article from your website, or share with your friends using this button~ 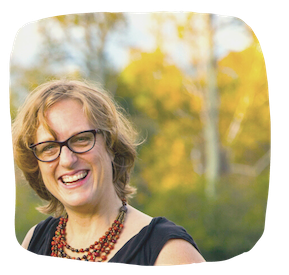 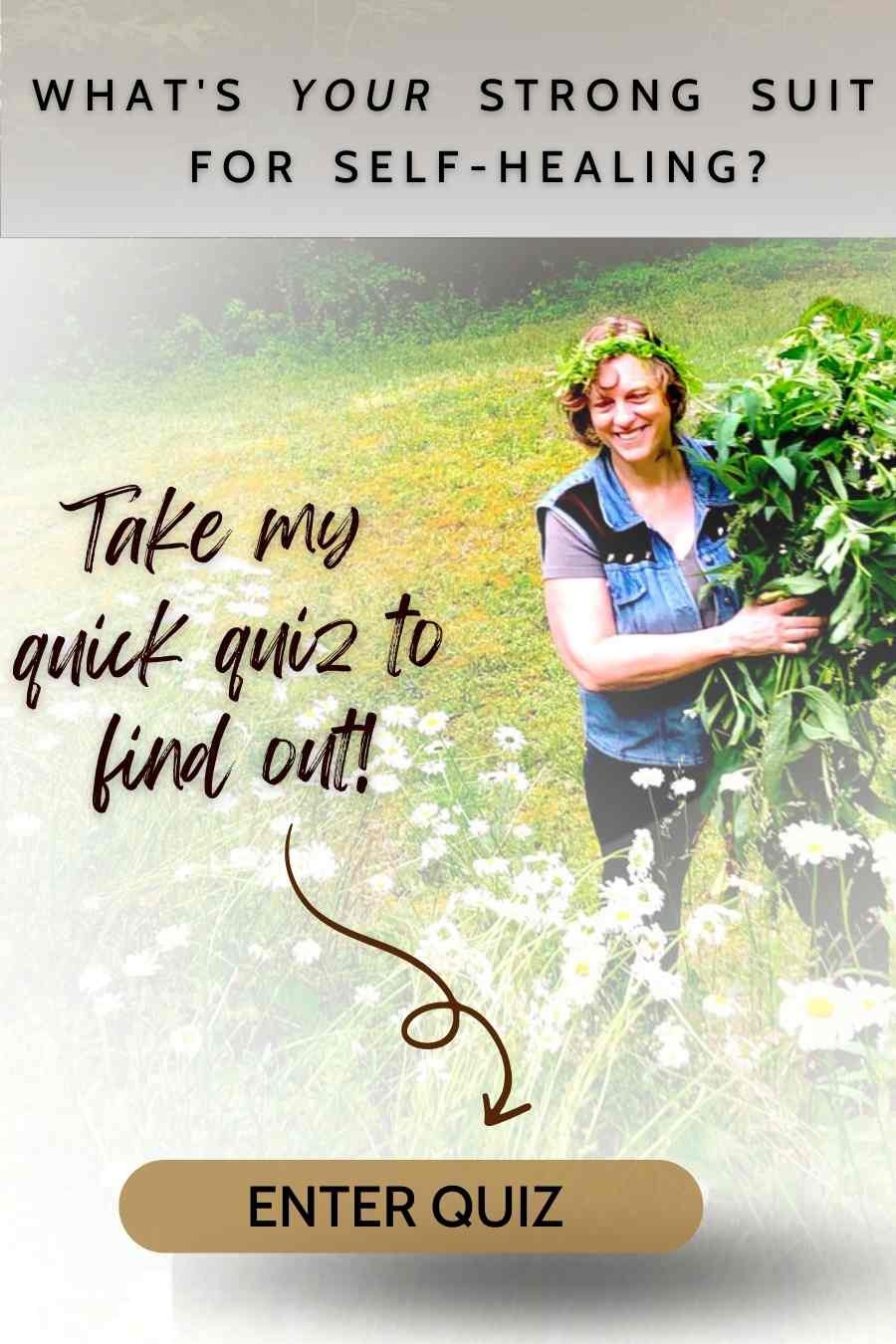 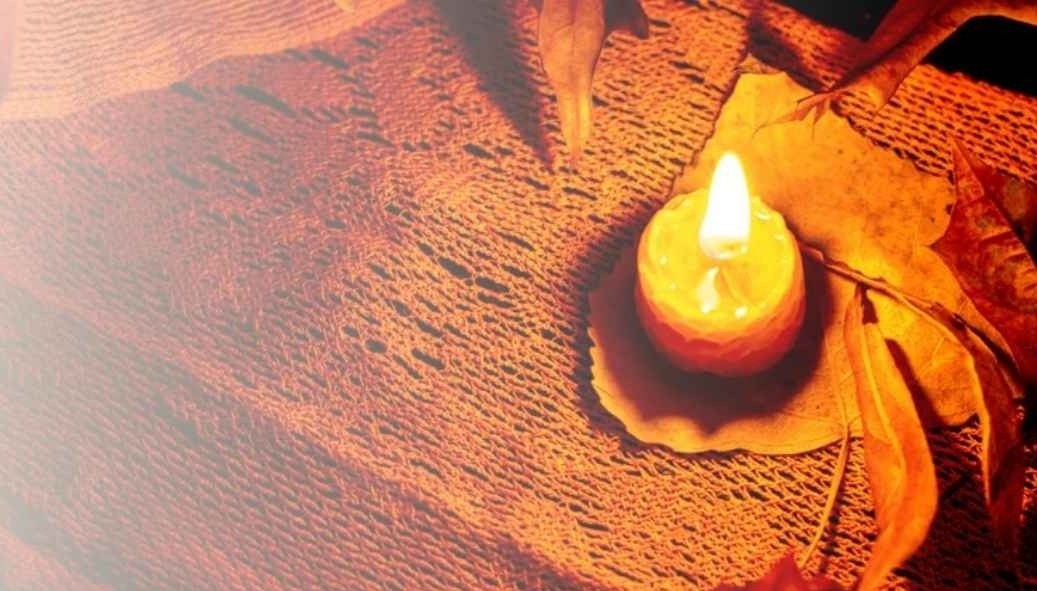 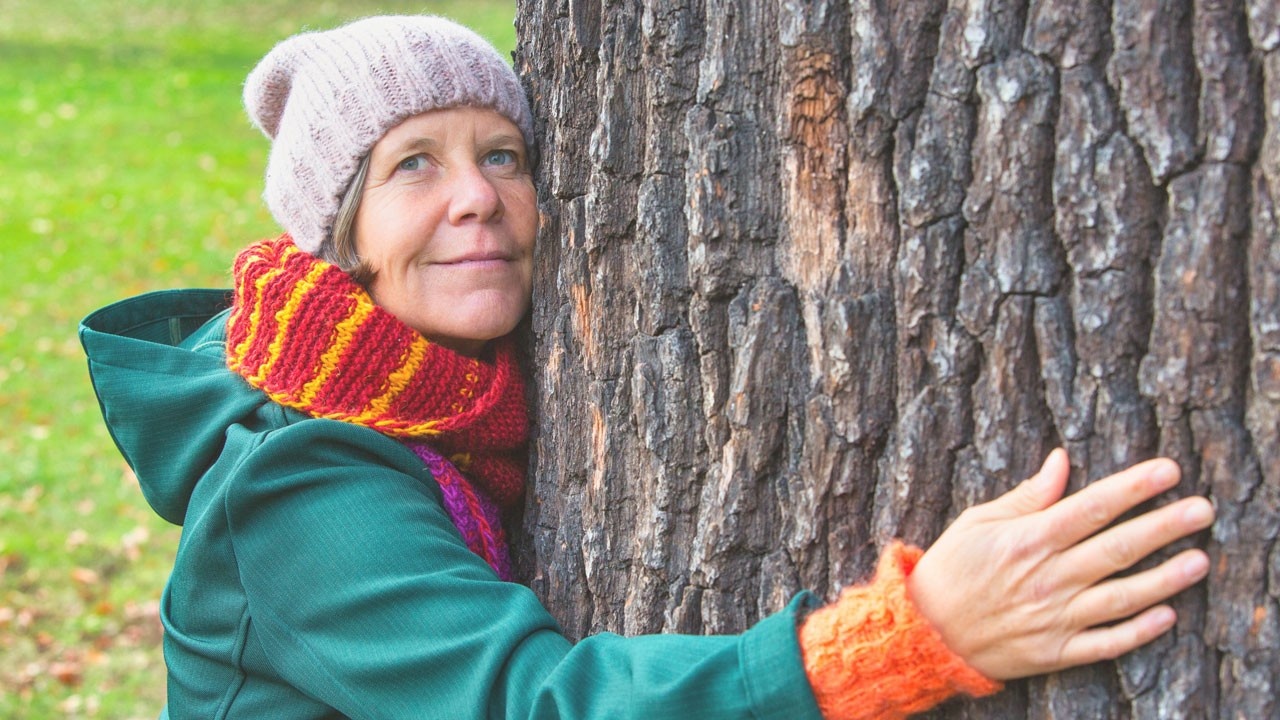 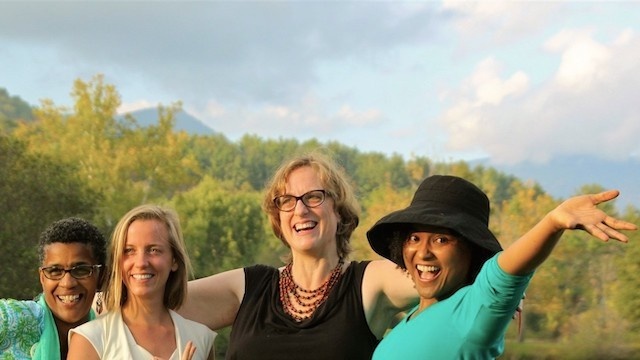