Meddle with nettle: my favorite herb for women 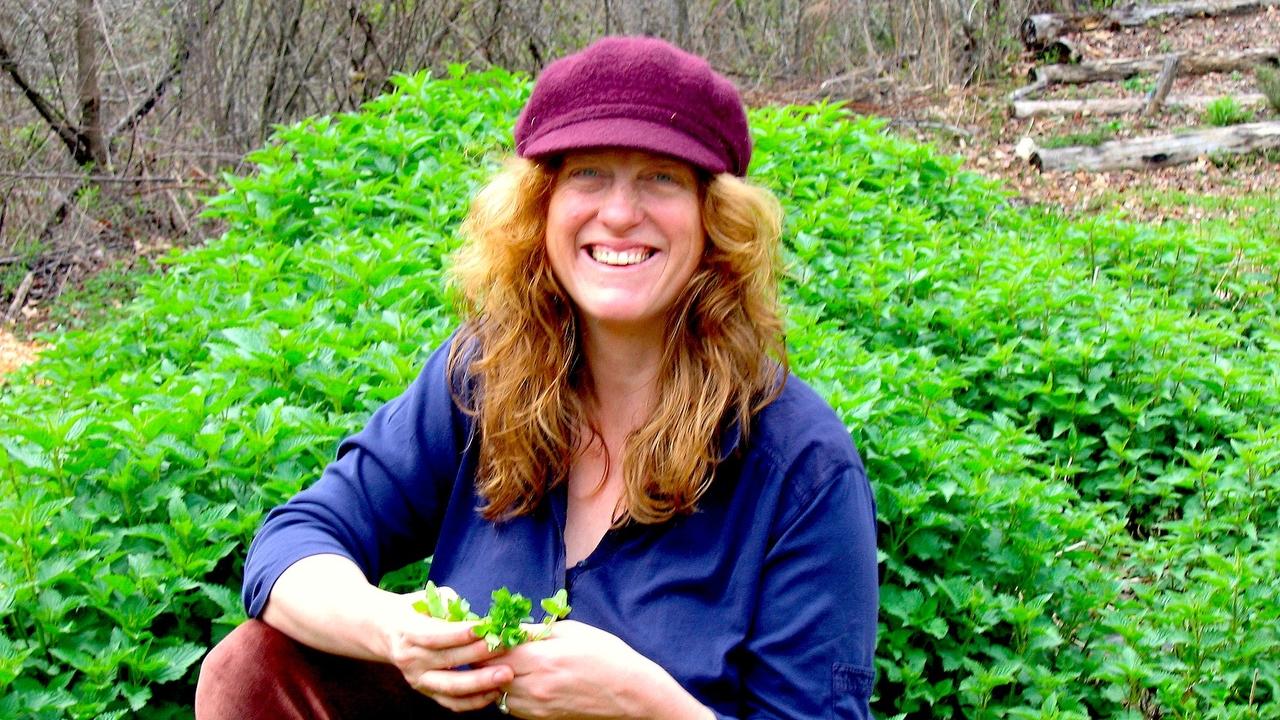 Anyone who loves green growing things becomes enchanted in springtime. I love to go foraging during those first warm days, and, well, sometimes I become distracted. One particularly fine afternoon recently, a friend and I were blissfully picking violets near an old barn when my arm brushed against a nearby plant, and I felt a familiar tingle – an electricity – where we had touched.

Nettle! How could I have missed her? Not one to be ignored, she quickly got my attention, and that of my friend as well.

I was actually delighted at the discovery of a new nettle patch. My companion didn’t quite share my enthusiasm, maintaining a respectful distance from her new acquaintance. But that’s the way it is with nettle. Love her or not, once you’ve met her, you don’t quickly forget her. 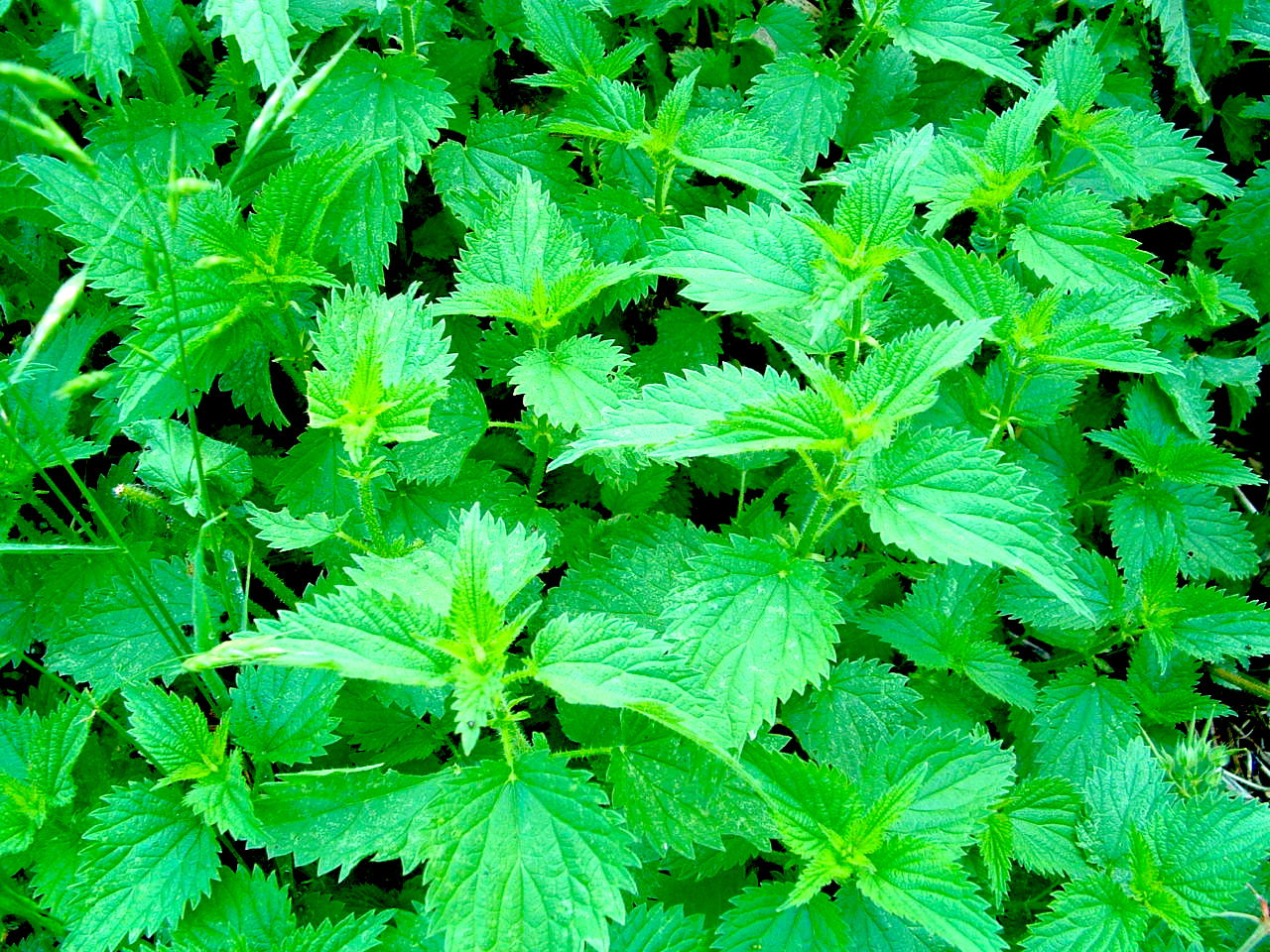 Stinging nettle (Urtica dioica) otherwise known as barn nettle or English nettle, and her cousin wood nettle (Laportea canadensis), are plentiful in our area. Barn nettle resembles a large mint, with serrated, blue-green, opposite leaves. It likes to live near compost piles or in manure rich soils, hence its propensity for buildings that shelter livestock. Wood nettle has alternate leaves and prefers to settle around forest streams.

Ah nettle. How do I love thee? Let me count the ways…

Wait. Before I begin extolling her virtues, perhaps I should address her antisocial side. It’s unfortunate - nettle’s inhospitable demeanor belies her true nature as an incredibly generous herbal ally. Few plants provide such a rich resource to help nurture our wellness and nourish our bodies.

But stinging nettles can be challenging to encounter. The leaves, stem and roots are covered with minute “hairs” which trigger the release of formic acid (the same irritant present in ant bites) when you “rub them the wrong way.” Of course, this makes nettle very easy to identify. If you aren’t sure, simply brush your hand up into her foliage. She’ll let you know!

The tenderness rarely lasts long and can usually be remedied by chewing up some plantain or yellow dock and applying the macerated plant material to the affected site. If you’re bold, you can crush up some of the nettle itself, using gloves or a cloth. Crushing deactivates the sting and coaxes out her healing green juice which, when applied directly, actually soothes the irritation!

Of course, prevention is really the best option, so wearing gloves when engaging nettle is well advised.  She can be approached bare handed, though, if you are careful to grasp her firmly, smoothing down the hairs away from the stalk at the center of the plant, rather than brushing the hairs the “wrong way,” against the leaves toward the central stem.

So why would you want to meddle with nettle?  She is a veritable cornucopia of nutrients: calcium, magnesium, iron, B complex vitamins, C complex, vitamins A, D and K. She has protein, cobalt, trace minerals, potassium, zinc, copper and sulphur.

Nettles are especially rich in chlorophyll, which is only one molecule removed from hemoglobin, so they feed the blood. Add in nettle’s bounty of iron and it adds up to a fortifying tonic for anyone who is anemic or for pregnant, lactating, or menstruating women.

Nettle has also long been revered for its benefits to the kidneys and adrenals. The kidneys allow us to expel toxins and the adrenals help us to respond to stress (think adrenaline), so given the challenges of modern life, most folks can benefit profoundly from nettle’s medicinal properties. Additionally, she offers relief from seasonal allergies, strengthens the bones, hair and nails and nurtures the lungs, nervous, hormonal and immune systems – that covers a lot of ground.

One of the wonderful things about nettle is that her nutritional benefits are delivered in a very balanced form and are easily assimilated and absorbed into our systems. My own little boy has been downing nettle infusion since he was baby, and he still loves a cup of nettle infusion with honey.

Nettle can be integrated into our lives in many ways, and with a bit of careful planning we can enjoy her year-round. If given the choice, I prefer barn nettle, since it is the more potent variety, but don’t pass on wood nettle if she is present. Gratefully accept what is offered.

Speaking of which, if you're wanting to cultivate your connection with the plants (and your own wildness as a woman!), you'll enjoy my free guide, Wild plants, wild women!

Eating stinging nettles? Yes, eating! Just 10 minutes of cooking removes the sting, although I prefer to cook them “southern style,” for 40 minutes or more, which breaks down the cell walls to make the nutrients more available.

Prepare nettle greens by steaming or sautéing as you would any other leafy green such as kale or spinach. The heat entices all those marvelous minerals from the leaves and tames nettle’s sting so you can dine with confidence. My favorite way to eat nettles is Stinging Nettle Soup (recipe below).

The first tender shoots push through in early spring, so from April into early June nettle can be harvested for eating. Reap only the top two to four inches, since the lower leaves tend to be tough. And don’t consume nettle after flowering, which begins around June in the mountains of North Carolina. This doesn’t mean that you need to spend the summer without nettles. Careful harvesting of the tops of your favorite stand can prevent flowering and extend the bounty into the autumn. 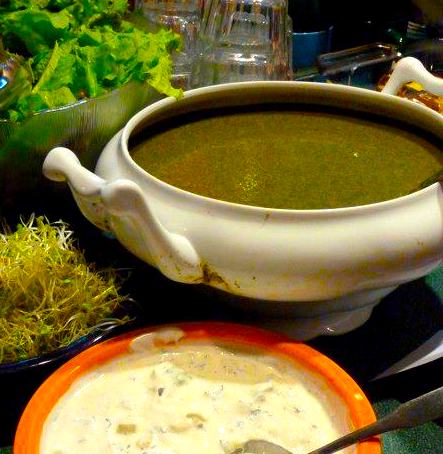 garden or playing in the woods can stir up a healthy appetite. When hungry faces surround my table, I like to prepare a hearty meal that nourishes body and soul. This rich, buttery nettle soup hits just the spot. Nettle soup is considered a macrobiotic delicacy, and nettle’s bonanza of nutrients stays with you long after the plates are cleared. Serve it up with some brown rice or bread and butter, and it will provide plenty of energy for an afternoon among the herbs, or an evening of great conversation with friends.

Saute the onions and garlic in a little olive oil. Stir in your carrots and potatoes. After a few minutes, cover them with the water or broth (vegetable or chicken broth work beautifully). If your nettle tops are small, you can put them in whole. If they’re larger than you would want to have on your spoon, put your gloves back on and chop them coarsely before adding to the soup. Bring to a boil and let it all simmer for 35 to 45 minutes. Dilute several spoonfuls of sweet white miso in some of the broth, and then add it to the soup bowls at the table so the beneficial microorganisms don’t get cooked by the boiling temperatures.

Vinegars are also an excellent way to bring nettle’s benefits to your table. Harvest the nettles for vinegar any time before it flowers. The stalk has at least as much medicinal value as the leaves, so cut as far down the stem as you can--while still getting the fresh, green leaves rather than the holey, brown ones at the base of the plant.

Tightly pack a jar full of plant material and fill the jar to the top with raw, organic apple cider vinegar. Line the top with waxed paper or plastic wrap to prevent rust if your jar has a metal lid. Let it brew on your countertop, out of direct sun, and add vinegar as needed to keep the plants covered. After six weeks, strain out the plant material and use on your salads and in marinades for an extra boost of minerals.

For a concise reference chart on making vinegars, infusions and other herbal preparations, check out my Wise Woman Medicine Making Guide. 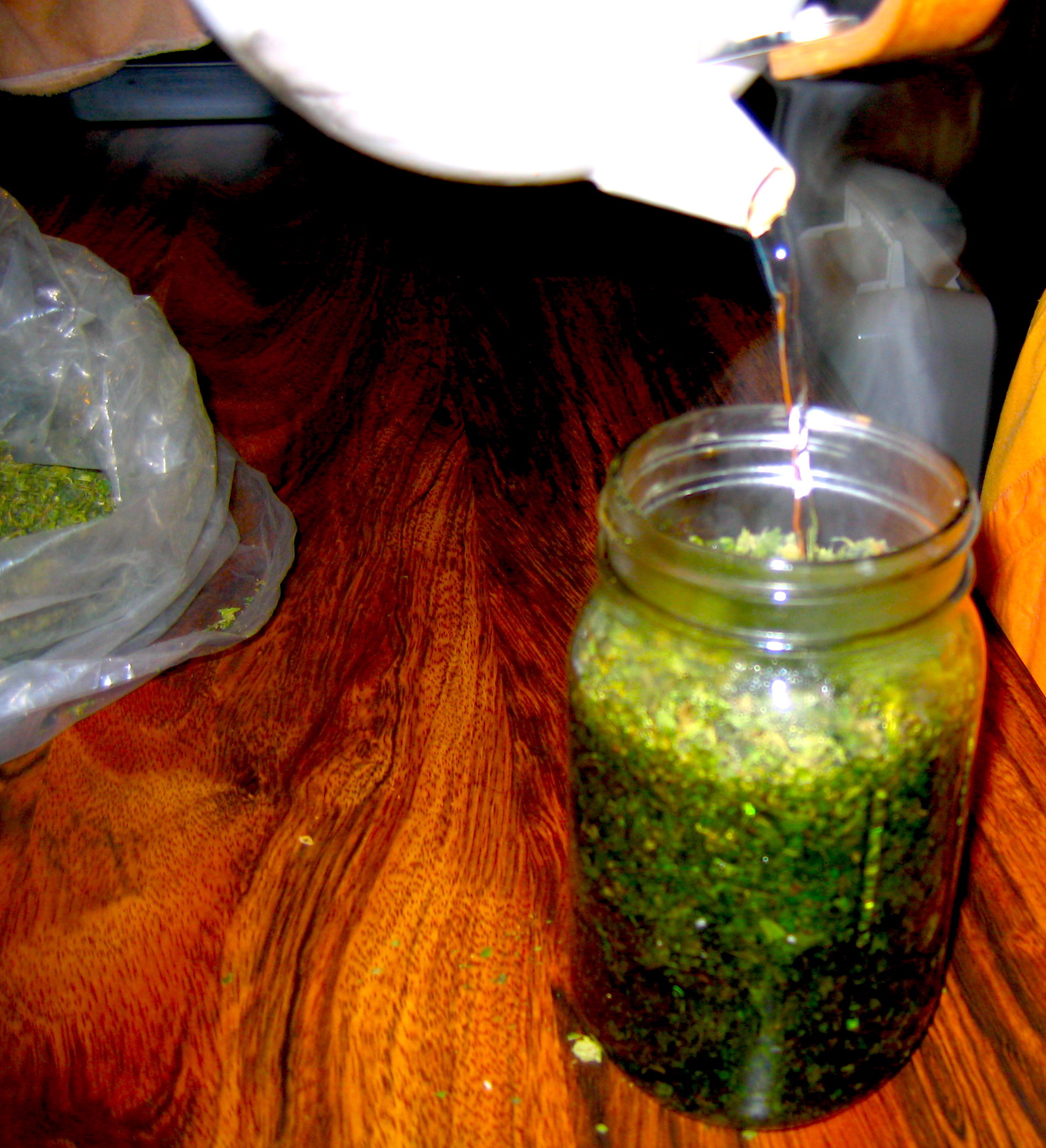 Probably the most effective method of receiving the nourishing, medicinal properties of nettles year round is in an infusion. Harvest the nettles in late May through June, when they are tall and vigorous, down to one to two feet off the ground. Bunch the nettles in groups of three and dry by hanging, or in your oven using only the pilot light.

When the plant snaps easily at the thickest part of the stem, it is fully dry. Immerse one cup of dried nettle in a quart of boiling water and allow the infusion to sit for at least four hours. Strain the liquid and store in the refrigerator for several days. A standard dose is 2 cups of nettle infusion per day. If it’s been in the fridge for a few days, a quick sniff will let you know if the infusion has turned sour. If it has soured, it makes an excellent fertilizer for your plants, or a hair rinse that adds shine and texture.

A cup of this rich, green, velvety nettle infusion per day is deeply nourishing for women at any stage of life, for men, for the young and for the old. Yes, nettles are good for just about everyone.

Who would have thought that a lady with such a rough exterior could be such a sweetheart underneath? 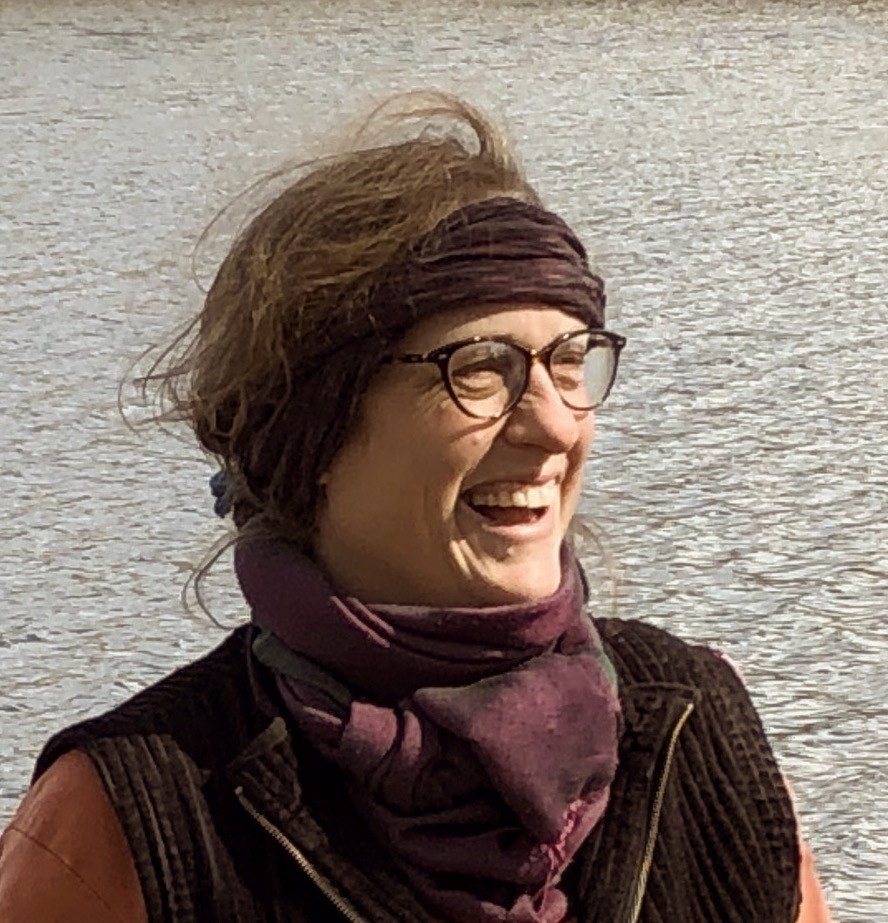 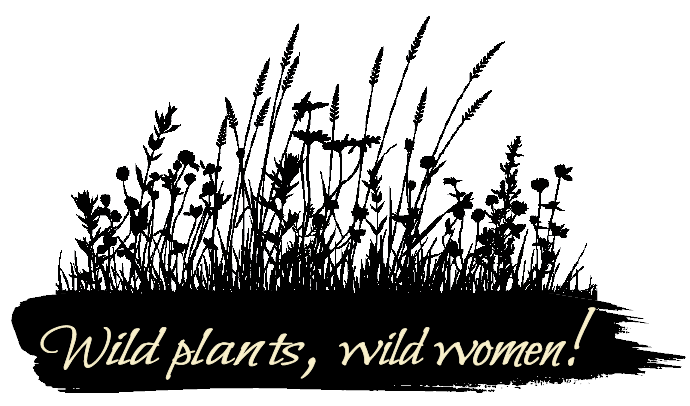 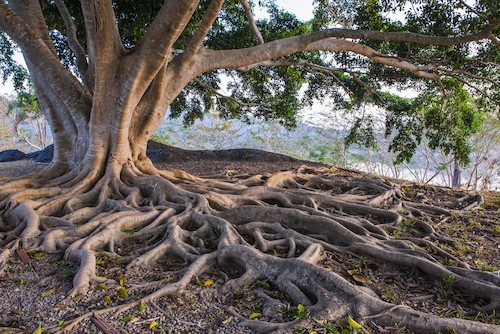 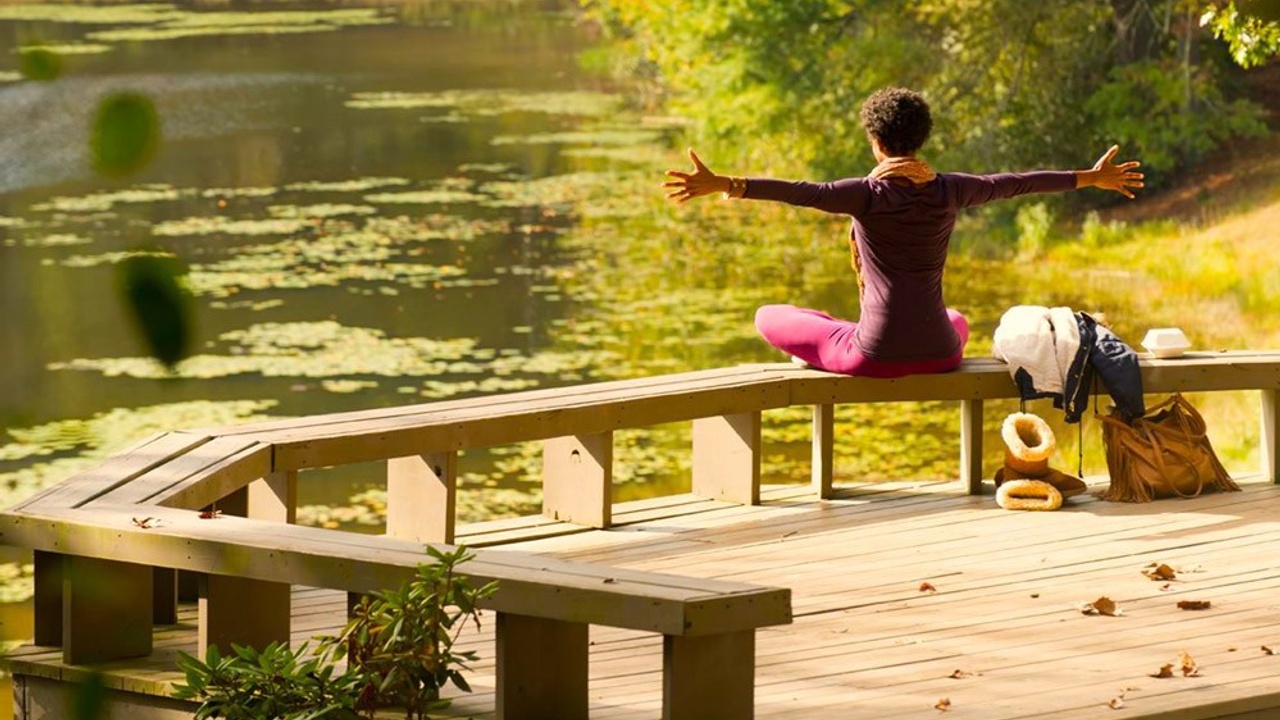 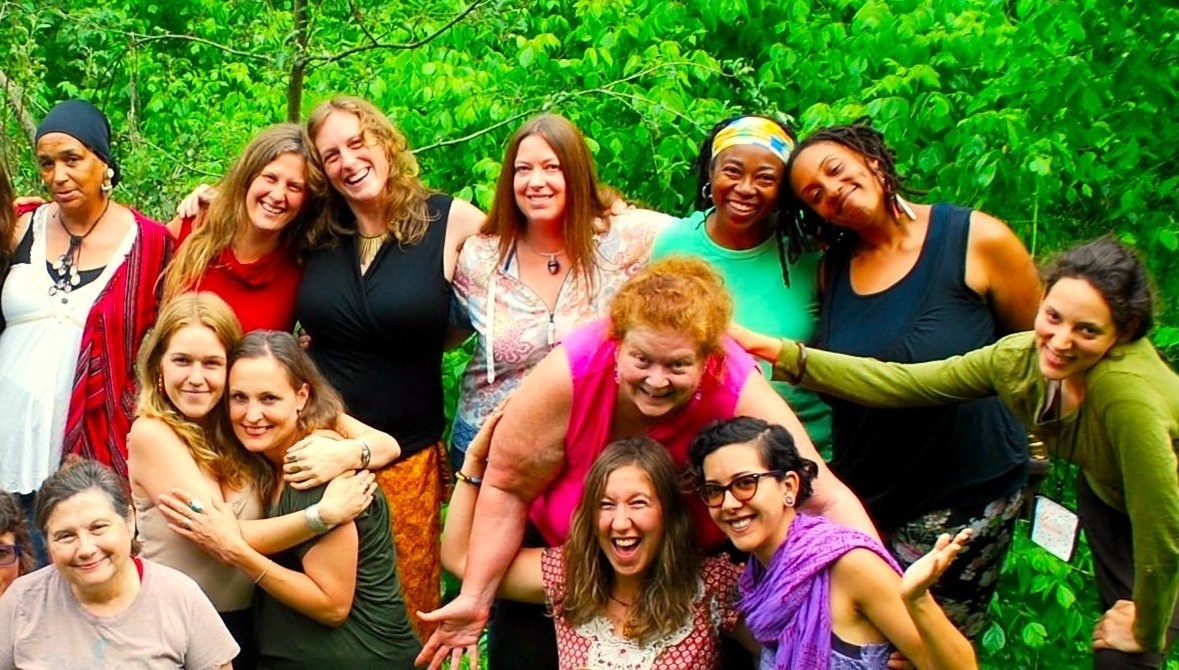